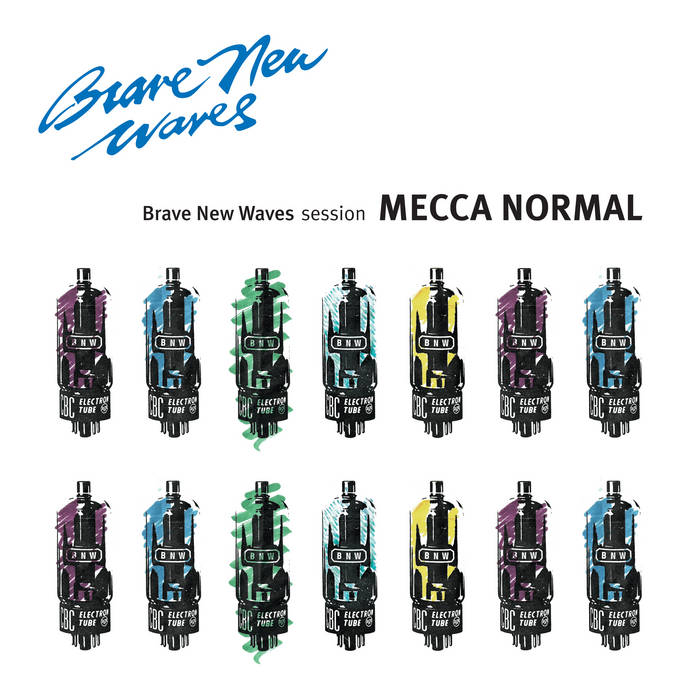 Irritated by the standard four-guys-on-stage scene in the early 1980s, Mecca Normal – Jean Smith and David Lester – formed their voice-and-guitar duo with one thing on their mind. Changing the world. Weirdly, they succeeded. Frequently cited as an inspiration to the co-founders of Riot Grrrl, Smith regularly spoke from the stage between songs in the 80s and 90s, encouraging women in the audience to form bands of their own, and a few key figures did just that. "Jean Smith was really poetic and had feminist ideas at the core of a lot of her songs and she wasn’t ashamed of it. And when I saw her, I was just like, that’s it. I’m done. I’m sold." Kathleen Hanna, Bikini Kill (The Fader, 2010)

For a few years in the 90s, Vancouver's Mecca Normal headlined (and sometimes sold out) shows on the west coast and in the Northeastern USA, yet, until now, there hasn't been a live album. For a brief time in the mid-90s, New Zealander Peter Jefferies (Nocturnal Projections) was on drums. Known for the intensity of their live shows, this one borders on incendiary. Recorded at The Cabaret, a beautiful little theatre in Montréal, Québec on April 16, 1996 for later broadcast on CBC's Brave New Waves, Smith's unparalleled delivery of songs about injustice is viscerally enmeshed with Lester’s furious guitar. As for the drums… while there is wisdom in not allowing romantic partners in a band, that tension had been intensified after the couple in question started a new band (2 Foot Flame on Matador) while living in New Zealand. "Maybe it's just me, but I figure the guitar and the drums are both trying to get the last word, while I felt I needed to elevate my performance to justify the drama," Smith recently divulged about the show.

In 2016, Mecca Normal opened three shows for The Julie Ruin (Bikini Kill members) at which Kathleen Hanna said from the stage: "Their music is still as relevant as it was 25 years ago when I first saw them. It makes me happy that their music is still relevant because they're doing it better than ever. And their new songs are so fucking great and hilarious."

Jean and David's incredible creative partnership continues, but its focus is currently visual art. Lester's graphic novel about the Winnipeg General Strike of 1919 is out now, and Smith has sold over 600 of her '$100 USD brand' paintings on FaceBook.

Mecca Normal's long-running association with the CBC’s Brave New Waves included many interviews as well as songs recorded by Kevin Komoda at DNA Studios in Montréal. Mecca Normal’s Brave New Waves session is released on vinyl, CD, and digital formats. The digipak CD comes with a short interview with Brent Bambury, as well as bonus cuts from the CBC archive. Released on Toronto-based Artoffact Records.